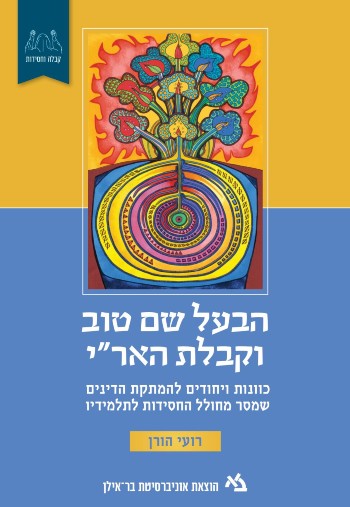 The Baal Shem Tov created the most important Jewish spiritual movement in modern times, which eventually became a broad mass movement. But Hasidism began as a rather exclusive group of Kabbalists headed by the Baal Shem Tov. What was the secret of the charm of an anonymous and unremarkable man in the eyes of great Kabbalists of his time? How did he open their hearts and minds on the one hand, and pave the way for building a new form of social existence on the other? With a careful tracing of instructions for prayer with Lurianic intentions, names of holy people for dealing with foreign thoughts and rituals for the "sweetening of the laws" given by the Baal Shem Tov to his students, this book seeks to explore the Baal Shem Tov's revolution.

Dr. Roee Horen studies and teaches Kabbalah and Hasidism in various settings. He wrote his doctoral dissertation at Ben-Gurion University under the supervision of Prof. Haviva Pedia. Dr. Horen edited three collections of articles on Hasidic figures. He has also published a number of articles in various forums.

Introduction: Entree into the Research of the Besht 13

1. Success has many fathers 13

2. Sources of our knowledge about the historical Besht 16

3. The Lurianic context of the Besht’s activities 23

6. Objectives of this study 40

Chapter One: ”To Connect the Self” in Intentions and in Unification – The Lurianic Kabbalah as a Reflective Language 41

2. Lurianic intentions: between exaltation and isomorphism 44

3. Execution of the Lurianic intentions in the Kabbalistic circles of the Besht’s contemporaries 50

4. ”To connect the self” in intentions and unifications 53

6. The reading of the Lurianic intentions in the Besht’s circle and among his followers 64

Chapter Two: Immersion in Mikveh as Sweetening of Judgments in their Roots 73

1. Immersion in the mikveh: from the scripture to the Besht 73

2. Meaning of the immersion according to the book Reshit Hokhmah 75

3. Intentions of the immersion according to the Besht 77

4. Intentions of the immersion ”to abolish a bad dream” 79

5. Commentary of the Maggid of Mezeritch on the Besht’s intentions of the immersion 87

7. Purpose of the immersion in the mikveh according to the Besht – as it is expressed in Hasidic guidance books 91

8. Immersion in the mikveh as a substitute for asceticism 93

10. Summary: immersion of the ba’al shem in the Lurianic intentions 100

1. Confrontation with the problem of foreign thoughts in the Kabbalistic literature 104

2. The Besht’s approach to the problem of foreign thoughts 109

4. Raising of foreign thoughts as the sweetening of potential judgments 114

5. Anchoring of the Besht’s prophetic abilities in the Lurianic Kabbalah 116

6. Anchoring of the raising of foreign thoughts in the Lurianic Kabbalah 120

Chapter Four: Unifications for the Raising of Foreign Thoughts 126

3. ”Shaddai and his change to KeHaT”: from killing of the wicked to sweetening thoughts 131

4. Name ”KUZU ” – from exorcism to sweetening of foreign thoughts 134

5. ”ROMaH” – from the magic weapon to correction of sexual thoughts 139

7. Esoterics in teachings of the Besht 148

8. Raising of sparks: from Rabbi Isaac Luria to the Besht 151

Chapter Five: Sweetening of the Judgments That Are in Speech 153

1. The basic meaning of speech according to the Besht 153

2. The sweetening of judgments in every letter and word 156

5. The letter aleph in the book Ma’ayan HaHokhmah 161

9. Advantage of the light over the darkness 175

13. Sweetening of judgments in the language according to the followers of the Besht 185

1. Rabbi Nahman of Horodenka: ”Whoever sees something ugly in his friend, will feel that it is in his favor” 185

2. Rabbi Hayim Krasner: ”To sweeten the curses in the filling letters” 187

4. Rabbi Nahman of Bratslav: on the failure of the Besht in the sweetening of speech 193

1. Rabbi Israel Harif and his attitude towards the Besht 202

2. Ritual ”to remove the judgments” in the name of the Besht 205

3. Sources of the ritual in the Kabbalistic literature and their contexts 209

5. Parallels between the ritual ”to remove the judgments” and other sayings attributed to the Besht 217

1. Design of a long Kabbalistic ritual 218

2. Ritual of removing judgments using the book of Torah, three judges and an intention in the names of EHYeH (lines 3-4) 218

6. On a possibility of the attribution of the ritual to the Besht 227

7. significance of the ritual to the issue of the emergence of Hasidism 229

Summary: Sweetening of the Judgments in their Roots and the Image of the Besht 233

1. Methodology in the research of the Besht 233

2. Sweetening of the judgments in their roots and the Lurianic Kabbalah 235

3. Sweetening of the judgments and a fable of the walls 239

4. The influence of the Besht’s teaching of sweetening of the judgments 241

1. Psychological reading in the Kabbalah 242

2. Placing of the individual in the center and a creation of a modern movement 243

Appendix: Did the Besht Drink the Bitter Water on His Way to the Land of Israel? On the Book Brit HaMenuhah in the Spiritual World of the Besht 247

This study purports to examine the status, roles and meanings of the nigun in the writings of Rabbi Nahman

This book offers a new approach to understanding the thought of one of the most fascinating personalities in Hasidism in particular and in Jewish life and thought in general - Rabbi Nachman of Breslov.

This book illuminates one of the most important works in the Kabbalah of the Middle Ages, "Tiqqunei ha-Zohar".

The book deals with the influence of the Kabbalah on the Halakhah, liturgy and ritual customs, and the reaction of the rabbinic authorities to this phenomenon. The book also investigates the extent to which the kabbalistic instructions were accepted b