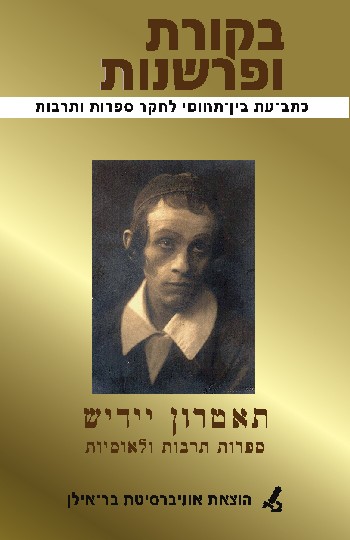 This anthology of Hebrew poetry readings takes us on a journey between periods, poets and voices in Hebrew poetry throughout the ages.

This collection of articles joins the fruitful research developed in recent years about the Hebrew song. The sixteen articles included have been written by prominent researchers in various research fields: the field of cultural studies and history of Isra

The issue On the Brink: Liminality in Literature and Culture sets out to explore different aspects of geographical, anthropological and cultural border situations, and cross-cultural encounters within and outside of Hebrew literature. The condition of soc

This issue is devoted to an interdisciplinary discussion of the relationships between different areas: theories of aesthetics and literary research, the philosophy of language and the ontology of fictional entities, historiography of culture and ethic

Read more
The Holy Tongue; Comedy's Version
'Intertextual Dramas on the Stage in a ''A Comedy of Betrothal

This book focuses on A Comedy of Betrothal (Tzahut Bedihuta DeQiddushin), the earliest known Hebrew play. The study of this Renaissance comedy, dated to the mid-16th century, and attributed to Leone de' Sommi (Yehudah Sommo), a multi-talented Jewish theat

The book examines a neglected literary genre of ’the Haskalah period. The different chapters offer new readings of the biblical stories in previously unknown plays and assess their poetic and dramatic value together with’their relevance for the contempora

Photo-reproduction of the classic collection of 376 folksongs, printed in Yiddish with transliteration, originally published in St. Petersburg in 1901. This new edition, annotated and with an introduction by Dov Noy, is the first in a series of reproducti