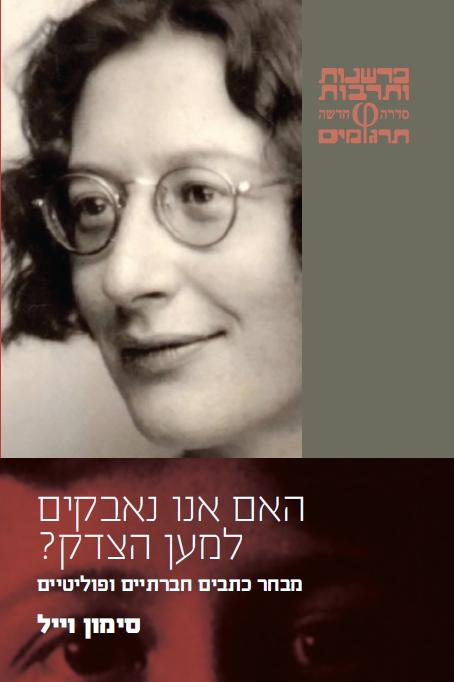 
Albert Camus testified to Simon Weil that she is "the only great spirit of our time." Weil (1943-1909) was interested in philosophy, religion, mathematics and mysticism, but her studies of the peaks of the wind, the wisdom of Greece and India, did not detract from her concern for the problems of the hour. In order to better understand the alienation involved in work in the industrial age, she experienced work as a hired laborer and experienced the difficulties of work involved in routine and monotonous operations. Simon Weil was actually a social activist, first of its kind.

This book is intended to expose current social thought in the face of the crisis that befell the Western world. Weil described the processes that erode social solidarity and laid the foundations for a just socio-political order.

This book includes seven articles: "Are We Fighting for Justice?", "Draft declaration of obligations towards the person", "Reflections on the Reasons for Freedom and Social Oppression", "Prerequisite for non-slave labor", "Essay on the Concept of Reading", “Other Reflections on the Concept of Value”, and a chapter in her book Rooting that deals with the mental needs of man.

The book also includes three essays on Simon Weil from the pen of the book's editors who teach at the Open University: "Simon Weil - Body and Work" by Prof. Aviad Hefetz, "Simon Weil - Living to Write, Writing to Live" and "Simon Weil and the Jewish Question - Between Grace and Law" by Dr. Dennis Sharvit.

Similar Books
Between Philosophy and Literature

The main purpose of the book is to expose the philosophical positions embedded in literary works dealing with various philosophical questions.

This book connects existentialism and romanticism. Its aim is to show that at the heart of Sartre’s philosophy is a cohesive core of romantic ideas that influenced his existentialist thought.

This book offers a comprehensive reading of Hegel's philosophical project, tracing this project from its moment of conception as a critical reaction to Kant's philosophy, through its first theological formulation, to the discovery of the Idea of Spirit, u

Read more
Karl Jaspers: From Selfhood to Being

This book traces the thought of the German philosopher Karl Jaspers, from his early writings as a young psychiatrist to his mature thinking as an existentialist.