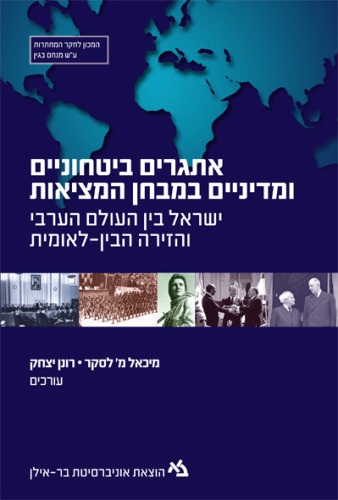 Security and Political Challenges Put to theTest
Israel in the Arab and International Arenas
Edited by: Michael M. Laskier, Ronen Yitzhak
This book concentrates on two central areas: first, security challenges posed to the Jewish community in pre-independent Israel and in Israel during its first six decades of the post-1948 period, second, foreign policy and diplomacy in the Cold War era related to the Jewish state’s ties with the Western powers and the Arabo-Muslim world. Most of the studies are largely influenced by interdisciplinary approaches and analytical diversity and include such disciplines as sociology, history, political science/international relations, gender, and conflict resolution. As far as periodization, the chapters range from the 1920s to the present. Most chapters are presented chronologically with each chapters constituting part of the whole. The book is unique given not only its originality and innovations attributed to the contribution made by both senior and young scholars. It is based on topics hardly touched by other studies on Israeli and Middle Eastern history, including Israel’s relations with the Maghreb states, path-breaking theses on Israel’s wars with its Arab neighbors, Israel’s special ties with France until the mid-1960s, and the role of women in the Haganah. The project raises four dominant questions. First, how is Israel grappling with security matters on and beyond her borders and what are the Israeli government's top priorities defense-wise since 1948 concerning the Palestinians? What is the position of the Israeli-Arab communities in the days of the military administration and that of the Druze population vis-à-vis the security issues of the Jewish state? What are the security and diplomatic challenges that faced Israel during the Cold War until the early 1990s, as well as the significance of the reciprocal ties shaped over the course of time between Israel and the Western powers? How are we to assess Israel's relations with the Arab states? In addition to the extensive use of the Israeli, Arab, Russian, and western press, the primary sources enriching the volume consist of hitherto untapped archival materials located in Israel, the U.S., France, Russia, and East Germany. Documentation and analyses of important topics such as Israel's relations with France, Egypt, Syria, the status of women in the Haganah, Israel's ties with Algeria and Tunisia, the 1948 Palestine War from an Arab perspective, U.S.-Israeli relations during the Nixon Administration, a reassessment of Soviet-Egyptian relations in the Nasser era and Israel's position caught in the middle, aspects of Israeli-Palestinian ties from vantage points thus far ignored or analyzed superficially by journalists, the former Soviet Union and the Middle East from a Russian point of view – all of these provide ample testimony to a multi-dimensional methodology.

For 30 years King Hussein strove to construct a bridge of peace between Israel and the Hashemite Kingdom of Jordan, in a tireless effort to achieve two conflicting aims: the establishment of an agreement with Israel and maintenance of Arab solidarity.

A collection of fully annotated documents. Includes general introduction and foreword for each document.

Read more
Intelligence and Espionage in Lebanon; Syria and Palestine (1913-1918)
by Azia Bek

A critical edition of the memoirs of the Chief of the Ottoman Intelligence Service in the Levant during World War I. The book discusses the Turkish version of the break-up of the clandestine organization Nili and also refers to other Jewish espionage netw