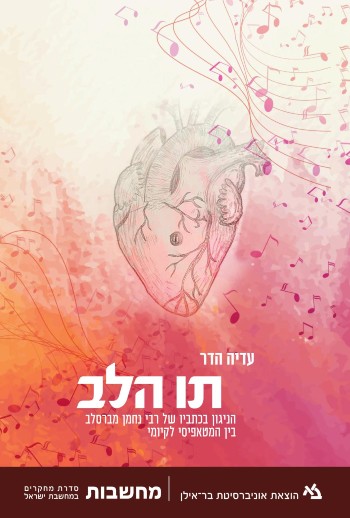 Recent years have seen a revival of the teachings of Rabbi Nahman of Braslav. What is it about Rabbi Nahman that, specifically in the New Age era, has more and more people drawn to his thought? Is it his existential mode that "touches" the soul of our generation or is it the nexus between spirituality and materiality?

This study purports to examine the status, roles and meanings of the nigun in the writings of Rabbi Nahman by way of comparison to the concept of music in the early Hasidic masters' homilies , from the Baal Shem Tov to Rabbi Shneur Zalman of Liadi.

Dr. Adaya Hadar holds a PhD in Jewish philosophy and is a researcher of Hasidism. Today she serves as the coordinator of the "Institute for the Study of Religious Zionism" at Bar-Ilan University.

Music as a vehicle or as a value itself 17

a) Music as representing or alluding to a metaphysical being 19

b) Music as representing or referring to concrete existence 19

A survey of the relevant research literature 27

Nigun as an image 35

The image of “the psaltery and the harp” 45

The images of organ, violin and musical instruments 48

The images of dance and the vessel of song 51

The difference between song and chant 78

Music of the nations 93

Trumpets and the voice of the shofar 103

The benefits of music as a religious instrument 147

Passage from sadness to joy 148

Ecstasy and cleaving to God 150

Magic and unification of the sefirot 152

Joy that brings about mystical exaltation and prophecy 157

Dance as a religious objective rather than driven by impulse 158

Music as political and educational seduction 160

Dr. Adaya Hadar holds a PhD in Jewish philosophy and is a researcher of Hasidism. Today she serves as the coordinator of the "Institute for the Study of Religious Zionism" at Bar-Ilan University.

This book seeks to explore the Baal Shem Tov's revolution

This book offers a new approach to understanding the thought of one of the most fascinating personalities in Hasidism in particular and in Jewish life and thought in general - Rabbi Nachman of Breslov.

This book offers the first comprehensive research discussion of the meeting of music and Judaism in theology.

Scroll of Secrets (Megillat Setarim) is the hidden Messianic vision of R. Nahman of Bratslav. The Scroll was concealed for two centuries, and was known only to a select individual in each generation. Despite its being written in encoded language, with acr

The book encompasses the field of music therapy from three points of view: practice, theory and research. It focuses on music psychotherapy and enlarges on the professional dilemmas related to diagnostic and treatment approaches, theoretical models and re