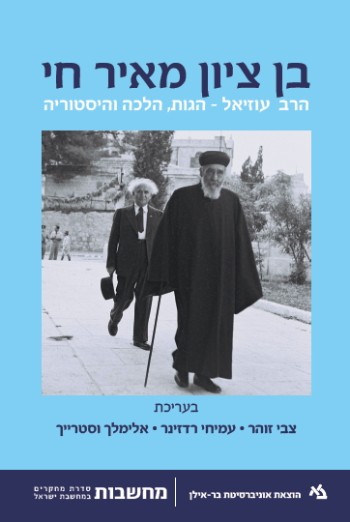 
Rabbi Ben-Zion Meir Hai Uziel (1880-1953), who was the first Zionist and the second Sephardic rabbi in Israel (and the first in the State of Israel), a public leader for decades, primarily in Israel but also in the rabbinical community of Thessaloniki, wrote extensively. His writings, printed in dozens of volumes, consist of different literary types: Halachic answers, commentary and hidushim, thought and epistles on various subjects. However, despite its wide scope and central place among twentieth-century rabbis, its creation and personality did not appear to be worthy of a place, and the research on it was relatively poor. In addition, the religious and rabbinical world also did not significantly internalize Rabbi Uziel's halachic and thought-provoking work, which in many cases was innovative and original, and presented fascinating confrontation with the challenges of the time: secularism, Zionism, agricultural settlement, the establishment of the state, the Diaspora, scientific progress, women's status and more.

This collection has come to slightly correct the situation and enrich our knowledge of Rabbi Uziel and his work and heritage. Three sections in the volume: Philosophy and Thought, Hebrew Law and Halacha, Public Activity and Leadership include twelve articles, by the best researchers in the field, as well as an introduction, presenting from various perspectives key pillars of Rabbi Uziel's image and work. From this, the volume makes a significant contribution to both the study of Jewish law and rabbinical thought of the 20th century in general, as well as to the public discourse on the ways of Jewish law and Jewish thought in the present and the future, in light of the new and modern state of Israel.

Hanoch Ben-Pazi Script, Language, and Shabbat: A Philosophical Study of the Concept of Witnessing in “Mikhmanei Uziel” 11

Zvi Zohar Individual, People, Humankind: Interconnection as a Core Ideal in the Worldview of Rabbi Uziel 73 Nissim Leon The Memorialization of Rabbi Uziel 103

Similar Books
Lot Casting, God, and Man in Jewish Literature
From the Bible to the Renaissance

The book illuminates and examines the multifaceted utilizations of lot casting in Jewish tradition from the Bible to the late Renaissance.

Read more
A New Man; in a Jewish Form
Self Fulfillment; Nationalism and the Concept of "Life of Expansion" in the Writing of A. D. Gordon

This book discusses the philosophy of Aaron David Gordon, known primarily as a pioneer and Zionist role modelץ

The book deals with encounters of aesthetic motifs in Jewish art, especially in combinations of text and sound, literature and music.

According to Maimonides, there is no difference between Jew and Gentile on a human level. This will be proved based on his Mishneh Torah.