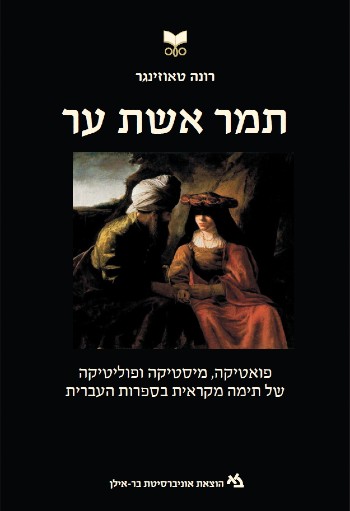 The protagonists of this book, Tamar and Judah, respectively, are the wife and father of two brothers, Er and Onan, both of whom die in the prime of life without fathering any children by Tamar. The widowed and childless Tamar waits by the roadside for her father-in-law at the entrance to Einayim (Petach Einayim), with her face veiled to conceal her identity. Following the sexual encounter between them at the entrance to Einayim (Petach Einayim), Tamar conceives a new generation of her family, and the twins she bears, Zerah and Peretz, mark the start of the messianic dynasty of the House of David.

Through a diachronic-thematological review, the multi-versioned nature of the story of ‘Tamar Wife of Er’ is revealed as a unified literary whole derived from a single genealogical foundation. Exegetes, commentators, mystics, and storytellers review its multi-versioned existence as a series of echoing observations.

Through the Pseudepigrapha, Hellenistic Literature, Midrash, Jewish Liturgical Poetry, Medieval Bible Commentary, Jewish Sermon Literature and Homiletics, Didactic Ethical Literature, Chronicles, Kabbalistic Literature, Sabbatean Literature, Hasidic Literature, and concluding with Modern Hebrew Literature from the period of the Jewish Enlightenment to the present day, the thematic series ‘Tamar Wife of Er’ contains approximately 150 versions of Jewish stories based on the biblical archetype in Genesis 38. This book unfolds the chronological changes of these versions, while interpretively examining them in light of the different genres in which they were written, the cultural background on which they grew, and the Jewish languages in which they were told.

Among the wealth of versions on this theme, one may distinguish a stable fictional formula that preserves the uniqueness of the story through its different renditions, and lends it the name: ‘Tamar Wife of Er.’ Nevertheless, the different versions raise a massive range of permutations and variations, which this book examines.

The story of ‘Tamar Wife of Er’ touches on a foundational archetype in which the breaking of a taboo is a necessary function of a “new beginning.” The story reveals fundamental paradigms of tribal civilization, kinship relationships, the laws of levirate marriage and relationships within the family in ancient civilizations, and puts all of these to the test by a transgressive sexual enticement and act of incest, leading to tribal and national redemption, and finally even messianic redemption.

Chapter One is devoted to examining the biblical prototype, using the findings of traditional twentieth-century literary-philological research. On this level, the prototypical version in Genesis 38 is examined through its affinity to its context: the tales of the House of Jacob and tales of Joseph, and likewise in light of its biblical parallels in the history of the House of David, the story of Lot and his daughters, and the Book of Ruth. This chapter views the story of ‘Tamar Wife of Er’ as a template for an origin myth, and aims to identify the source of the transgression in this template.

This chapter accords particular attention to those literary tropes that are due to develop into the central foundations of versions in generations to come. The research identifies the weave of motifs, i.e. narrative elements rooted in biblical reality that will reverberate in later versions. This chapter is crucial in noting significant story forms from which there will be substantial thematic deviations throughout the theme’s reincarnations. The tale of ‘Tamar Wife of Er’ is examined as a story set in the milieu of the establishment of Jewish tribal civilization. As such, this study seeks to identify defining (but literary) paradigms relating to tribal life, such as: exogamy, kinship relations, laws of levirate marriage and, principally, breaches of taboo in the laws of this particular tribal society.

Chapter Three Part A deals with versions in the Midrash and Talmud where the theme merited particularly rich embodiments in Genesis Rabba as well as in the Babylonian Talmud; Part B examines the translations of Genesis 38, and suggests the critical commentary on the translations of ‘Tamar Wife of Er’ as a story about translation. Bible translations became a vital avenue for broadcasting the story to a popular audience. These translations are paraphrased literary works that became a sort of “rewritten Bible.” The chapter treats the translations as independent literary phenomena. Part C focuses on the thematic representations in the liturgical genre and traditional Jewish liturgical poetry between the fifth and fifteenth centuries. This chapter surveys texts from early Land of Israel poetry, through Medieval Spanish poetry, to the poetic legacy of the Spanish exiles in Safed in the sixteenth century.

Chapter Four Part A attempts to isolate the contribution of Medieval Bible commentary to the story, as expressed in compositions from Ashkenaz, France, Spain, and Islamic countries. Biblical commentary was an additional way of disseminating the biblical work. It aided the institutionalization and inculcation of the work, and, over time, the commentaries themselves became new versions, contributing their own particular development to the theme. Study of these versions indicates a broad range of hermeneutic approaches to the story of ‘Tamar Wife of Er,’ reflecting the plethora of biblical commentary as a genre within the Jewish tradition. This book focuses its attention on the literary style of these textual commentaries, that is to say, the recasting of the narrative elements, as exemplified in the early homiletic literature among the authors of the Tosafot, and the humanistic commentary inspired by the Renaissance in the Iberian Peninsula and Italy. Commentators who dismantled the story to build it anew are at the forefront of the study, whereas traditional interpreters – who did not deviate from the biblical fabula – are placed in the background to our discussion of these issues. Part B foregrounds the Midrashic works of the late Middle Ages, an important literary phenomenon in their own right – despite the fact that this Midrash is not of the first rank or anthological. The earliest of these versions is the Genesis Rabati version from the school of Rabbi Moshe ha-Darshan in Provence. Other Midrashim are taken from the Byzantine and Italian spheres, with the remainder of the chapter devoted to the Midrashic sphere of Yemen, which is imbued with the spiritual legacy of Maimonides. The distinctive representation of these texts is the Midrash ha-Gadol compiled by Rabbi David Ben Amram Adani. Part C reviews an eclectic range of versions drawn from the homiletic and sermon literature, books of law and ethics, chronicles and fables from the late Middle Ages to the Early Modern period in Christian Spain, the Balkans, and Ashkenaz. These new generic formulations, delivered in a diversity of Jewish languages (Ladino, Yiddish, Judeo-Italian, Dzhidi, etc.), convey the prevalence of the story of ‘Tamar Wife of Er’ in vernacular languages and different social strata.

Chapter Five focuses on the mystical delineations of the theme. Part A deals with Kabbalistic versions, starting with the highly sophisticated adaptation of the story in two weekly readings from the Zohar and on to Lurianic Kabbalistic texts from seventeenth- and eighteenth-century Safed. The story of “Judah and Tamar” was transformed into a model of  eschatological import. Raw materials touching controversially on kinship and family relations were reinterpreted as dialectical categories: contamination and purity, husk and spark, exile and redemption, holy aspects, and the “other” aspects. Part B deals with Sabbatean texts, particularly those expressing the conflicts of Sabbatean ideology in the wake of Shabbetai Zevi’s apostasy. These texts develop a dialectical approach centering on the paradigm of a positive commandment fulfilled by transgressing a negative commandment. This idea correlates to the paradox of the revelation of the Messiah being imminent in a sinful generation, and the mystical interpretation of the union of Tamar and Judah as a devious and tortuous act from which the Messiah of the House of David would be delivered. Such formulae are common in Sabbatean manuscripts and sermons, Sabbatean Bible commentaries, as well as collections of Sabbatean liturgical songs of praise. Part C concludes the discussion of “traditional” versions, and recounts how the theme featured in Hasidic fiction from the early eighteenth century to the close of the nineteenth century. These versions naturally sprang up in the shadow of Lurianic Kabbalah and its symbolic and conceptual universe. The Hasidic theological approach emphasizes the “descent” of Judah as a redemptive act intended to free oppressed souls and raise holy sparks . This new consciousness transforms Judah from a primordial tribal leader into a spiritual figure – the image of the Hasidic Tzaddik or righteous man, a figure subject to celestial dramas in the higher realms, after the manner of Hasidic hagiography. The sin of Judah and Tamar is signified as a necessary path of transgression, the only way in which the sanctified branch could grow.

The perceptions discerned in relation to all the versions mentioned thus far are pertinent to an understanding of modern Hebrew adaptations of this theme in prose, poetry, and drama of our day, which are examined in the last section of this work.

Chapter Six therefore brings into discussion the modern versions found in contemporary Hebrew literature, which no longer bear messages of the religious Telos (Midrashic, Ethical, Mystical-Kabbalistic, Hasidic or otherwise), but rather respond to the secular Telos: social, political, national, anthropological. The literary life of the theme suddenly became quite animated, particularly in the literary period of the founding of the State of Israel, and it continues to the present day. This chapter examines the revival of the theme of ‘Tamar Wife of Er’ in modern Hebrew Literature by means of an attentive reading of four contemporary works embodying literary and aesthetic high points from four different genres: a poem by Uri Zvi Greenberg, a short story from early in the career of Moshe Shamir, a play by Yigal Mossinson, and a novella by David Maletz.

Apparently a sleepy tribal-familial theme, the reverberations of which should have faded with the decline of the biblical era and dissolution of Jewish society after the Second Temple period, and which should have died alongside progressive secularization and the decline of religious life. Yet, the story ‘Tamar Wife of Er,’ is revealed in this book as a vibrant theme that sends out shoots all over the cultural sphere as it metamorphoses through cultural and symbolic, Midrashic and ethical, Kabbalistic and Hasidic, Enlightenment and modernist forms. The present study outlines new types of connections between the biblical story and contemporary cultural life, to the manner in which a Jewish Hebraic theme preserves its relevance beyond the simple discovery of simple source material through subterranean fundamental paradigms. This book presents a broad canon of different texts about ‘Tamar Wife of Er’ and remarks on their repeated but also always renewed reflection of the ancient narratological residues in contemporary and ongoing literary phenomena.