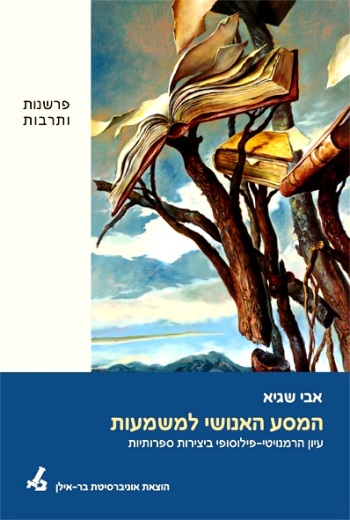 Second Printing - August 2014 The search for the meaning of life is one of man's deep passions. Humans are not content to merely exist. The want to understand their existence, to weave the different events, conditions and affinities of their lives into one complete, comprehensible story, which sheds new light on their whole existence. Philosophers deal with the meaning of existence as an academic question. Writers and poets, on the other hand, tell the real story of the human voyage to meaning. They do not see it as an academic question but rather, one that is based on reality, on the chance life circumstances in which humans find themselves. This journey begins with birth and reaches its conclusion in death. The voyage is not continuous and uniform, there are crises and changes along the way. It takes place first and foremost in man's consciousness and imagination and not in space. Its movement is inword rather than outward. It is, therefore, the artist , the author or the poet who documents this voyage, and his literary work is its embodiment. This work analyses several literary works that give expression to the human voyage or voyages. It deals with the Bible, with the poetry of Czesav Miosz, Zelda and Yehuda Amihai, and the fiction of Appelfeld, Brenner and Stefan Heym – vastly different works from different periods, sharing one thing – the desire to relate the story of the human quest for meaning. The chapters of the book trace the complex picture of human existence, which fluctuates between past and future, between the limitations of reality and the constant effort to surpass reality and arrive at new horizons of existence. This book sets out to interpret literary works in light of this ancient and important philosophical question: what is the meaning and purpose of human existence? The question is posed not from a metaphysical or theological point of view, but rather as an existential question facing each human being searching for the answer in his own life. From the series- Interpretation and Culture Edited by: Prof. Avi Sagi Man's nature is to interpret. Human beings, as individuals and as members of a society, are constantly engaged in the interpretation of their deeds, their values, their world and entire realm of activity. The act of interpretation is not the exclusive domain of scholars who research culture. Rather, it is first and foremost, common to every person in this world who strives to find meaning in all spheres of his activity. The act of interpretation is one of the distinguishing characteristics of human existence. Man as a creative thinker is not content with action alone. On the contrary, his acts are accompanied by explanation aimed at understanding. The art of interpretation is usually imbedded in the physical act itself. It is not confined to the light of awareness and methodological consciousness. However, at times interpretation becomes the main focus of study and our attention is diverted from practice to theory. This transition marks the beginning of a new interpretive approach to the study of different areas of human activity by means of deciphering, analysis and description. Such work is carried out by the theoretician and interpretation becomes an independent research discipline. The series ''Interpretation and Culture'' deals with interpretative instances. The books in the series treat the field of interpretation in various aspects: interpretation of literary, philosophical and theological texts, and interpretation of cultures and societies. Each and every book strives to propose an original, challenging interpretive reading.

This is a volume of research in Hebrew literature, dedicated to Prof. Avidav Lipsker - Researcher of Early and New Hebrew Prose and Historian of Hebrew Literature.

Read more
The Ecology of Literature

Ecology of Literature' is a new theoretical field that seeks to replace historiographic discourse with the 'literary republic'.

Read more
Between Philosophy and Literature

The main purpose of the book is to expose the philosophical positions embedded in literary works dealing with various philosophical questions.

It is a widespread conception that prayer is the essence of religious fulfillment. In the eyes of many, prayer can be understood only on the assumption that it is an appeal to God. Moreover, even the prayers of non-believers are perceived as a search for

Modern Hebrew Literature is engaged overtly and covertly, consciously and unconsciously, with moral issues. Historical upheavals – wars, immigration, the establishment of the independent country, the formation of an old-new culture – have brought about th